Frostbite in the Ear 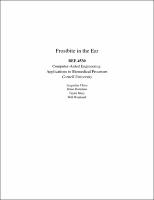 In many polar regions of the Earth, winters are long and cold, and they pose a series of problems to poorly-prepared residents. When walking outside on a cold winter’s day, freezing winds induce a high risk of frostbite on all exposed appendages. One of the body parts that is most susceptible to frostbite is the ear, due to its thin slab geometry, highly exposed surface area, location separate from the rest of the body, and the low levels of blood flow that it receives relative to other organs. In order to assess the relationship between the risk of frostbite and different types of wintery weather conditions, COMSOL 4.3b simulations were run for several scenarios. The geometry of the model consists of a detailed ear and a section of the side of a head. First, a fluid flow analysis was computed, in order to determine the steady state velocity profile of wind moving past and around the ear. Next, a heat transfer simulation was run to calculate the temperatures of the ear. The model was run for both the presence and absence of low speed wind, high speed wind, and sunlight. The goal of this project is to develop a computational model (schematic in Figure 1) describing how quickly frostbite occurs under various conditions, including different wind speeds, air temperatures, and amounts of sunlight. We computed solutions for different combinations of wind speeds, solar radiation and initial temperatures to determine their effects on frostbite of the ear. The wind speed values used were 1 m/s and 4.47 m/s, the solar radiation values used were 100 W/m2 and 684 W/m2, and finally the initial temperatures used were 233 K and 255 K. All combinations of these variables were computed. The parameters and variables of this model can be easily changed to simulate additional environmental factors. The results, determined by the fraction of the ear that froze, demonstrated that frostbite was most likely to occur when there was higher wind velocity, lower solar radiation, and lower initial air temperature. This shows that, given a constant environmental temperature, the highest risk for frostbite occurs on cloudy days or nights when there are high winds present. The effect of varying each parameter on ear temperature was also determined. Two variables were kept constant while one variable (wind speed, solar radiation or initial air temperature) was changed. The corresponding ear temperature versus time plots for a particular point inside the ear were compared to visualize the effects on changing each of these parameters. The change in solar radiation values caused the most significant difference in ear temperature at a point deep inside the ear. Changes in our wind speed values and initial air temperature values resulted in some difference in ear temperature at a point deep within the ear. But, wind speed is factor that has the greatest effect on the surface temperature of the ear. Therefore, wind speed appears to be the most significant variable when determining frostbite occurrence.