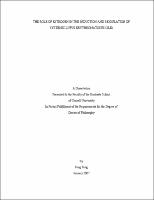 Systemic lupus erythematous (SLE) is a systemic autoimmune disease, characterized by circulating auto-antibodies to nuclear and cytoplasmic self antigens. A striking female predominance has been documented in SLE, with a female to male occurrence ratio of 9:1. Although the sex discrepancy in SLE has been attributed to sex hormones especially the female sex steroid estrogen, its importance is still controversial and other mechanisms are proposed, such as X inactivation, imprinting, differential exposures, etc. The present studies were undertaken to investigate the role of estrogen in inducing and accelerating lupus in lupus-prone and non-autoimmune mice and identify the possible mechanisms involved. We first ovariectomized or castrated female or male lupus-prone SNF1 mice in order to determine the impact that removal of physiological levels of sex hormones would have on the pathogenesis of lupus nephritis; exogenous 17?-estradiol (E-2) at a dose of 1mg/kg was also administrated to male mice. The results suggested that E-2 accelerated and exacerbated SNF1 lupus nephritis by inducing pathogenic idiotypic-reactive T cell populations that led to increased production of IdLNF1+ IgG which was deposited in the kidneys, resulting in nephritis. In, contrast, the removal of physiological level of testosterone had no effect. E-2 was also shown to induce the lupus phenotype and disease in the non-autoimmune mice, DBF1 mice. Further, the development of lupus nephritis in bone marrow chimeras derived from SNF1 mice of different genders or between SNF1 mice and the nonautoimmune-prone DBF1 cross, required either a female host and/or the addition of exogenous E-2. The possible mechanism(s) underlying the effect of estrogen were also investigated. Thymectomy of SNF1 mice (at 30 days of age) delayed disease onset; however E-2 treatment induced disease in thymectomized mice, suggesting that the thymus was not required for E-2 induced upregulation of pathogenic idiotypic-reactive T cell populations. Lastly, our data suggest that estrogen?s effects on lupus nephritis were ER-? dependent; E-2 exposure led to decreased survival and nephritis in WT (ER?+/+) but not ER?-/-, and SNF1 immune cells constitutively expressed more ER? compared to DBF1, which was upregulated after E-2 exposure.