Essays On The Motivating Effects Of Goals In Accounting 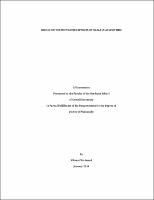 This dissertation presents two studies on the motivating effects of goals in accounting settings. Chapter 1 demonstrates that varying the horizon of a performance standard, which is treated as a goal by workers, affects motivation. In a lab experiment, participants exerted more effort on a task when facing short goal horizons. The shorter horizons allowed workers to achieve more goals in a given time, and this motivated them. However, as uncertainty in the task was increased, effort decreased with short goal horizons. By contrast, varying uncertainty did not affect effort when goal horizons were longer. The finding that uncertainty interacts with goal horizon can explain mixed findings in the goal-setting literature, and can possibly explain the variation in performance standard horizons observed in practice (De Angelis and Grinstein 2011). Chapter 2 demonstrates that the frequency at which goal progress information is provided to workers can also affect their motivation. In a lab experiment, motivation to achieve a goal decreased when feedback about goal progress was given frequently and there was high uncertainty in the effort-performance relationship. By contrast, motivation was not affected by uncertainty when feedback about goal progress was given less frequently because the uncertainty was able to cancel itself out to a greater extent. The reduction in effort due to frequent feedback and high uncertainty was due to participants' choice to abandon their goal and instead engage in leisure, especially when early realizations of uncertainty were negative and early feedback indicated low performance. These findings imply a benefit to aggregating information: when goal progress information is aggregated over a longer horizon, some of the task uncertainty cancels itself out, and workers are less likely to give up on their goals. These two studies have implications for accounting research and accounting practice. Accountants need to carefully consider the frequency at which performance information is provided to workers, and also need to consider the amount of time given to workers to achieve their goals. Both studies suggest a benefit to aggregation of results when uncertainty is high, but a motivating effect of frequent goals when uncertainty is lower.