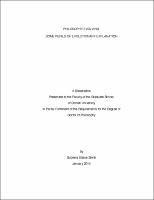 Many philosophers and psychologists with a naturalistic bent draw on evolutionary biology to support theories about aspects of human psychology and behavior. In this dissertation, I examine and develop some challenges to this approach. The dissertation is intended as an interdisciplinary contribution, examining methodological issues about the study of human behavior and drawing not only on philosophical resources, but also, crucially, on the work of biologists, evolution psychologists, sociobiologists and behavioral ecologists. Chapter 1 addresses Ruth Millikan's theory of proper functions. Millikan uses a model derived from evolutionary biology to give an account of the purposive and quasi-normative features of biological characters. I argue that although the theory of proper functions gives a useful analysis of the purposive and quasi-normative features of biological items, it places undue and unnecessary emphasis on selection at the expense of fitness. I go on to show that Millikan's attempt to reduce intentional purposes to proper functions fails, and that it conflates ultimate explanations with proximate ones. Chapter 2 develops a novel line of argument against evolutionary psychology, showing that the discipline is riddled with methodological flaws which result from attempts to offer ultimate explanations of contemporary human psychology. I argue that evolutionary psychologists are unable to show that the proximate psychology of contemporary humans is identical to the proximate psychology of prehistoric hominins, because they do not address the problem of individuating modules. I argue that such identities may be impossible to establish, and that any version of evolutionary psychology is therefore likely doomed to failure. Chapter 3 assesses Richard Joyce's evolutionary argument for moral skepticism. I show that evolutionary arguments of the sort that he offers suffer from various scientific and philosophical difficulties, including variations on the problems identified in Chapter Two. Joyce's argument consists of two components: an empirical argument about the evolutionary origin of moral concepts and an epistemic argument purporting to draw a metaethical conclusion from the evolutionary story. I show that both the empirical and epistemic components of Joyce's argument are seriously flawed, and that it cannot help one decide between moral realism and moral anti-realism, as Joyce claims.