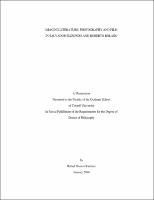 Imaging Literature studies the depiction of the human form and its fragmentation in visual images analogous to the fragmentation of the literary discourse. An analysis of the novels, short stories, and essays written by Roberto Bolaño and Salvador Elizondo pays particular attention to the way in which new means of mechanical and technological reproduction continue to enrich a representational paradigm within the arts. Imaging Literature is a study that, perhaps found closer to an essayistic exploration than to a theoretical analysis, tries to understand how literary works achieve the effects they do, how they relate to other literary texts, and how they affirm or contest literary conventions regarding structure and meaning. Attending not only to content and form but also to the thematic convergence of the texts explored in each chapter, this study is arranged into four chapters: a poetics of the superficial, a poetics of light, a poetics of the body, and finally, a poetics of pornography. The artistic possibilities writers of literature first saw in a medium such as photography may be read as the anxieties generated by literary innovation projected onto the visual medium, ultimately reflecting back onto the literary endeavor itself and shedding light on the limits of literary representation. The fragmentation of narrative, found with greater clarity in Salvador Elizondo's Farabeuf (1965) and Roberto Bolañ's Antwerp (2002), has a dual purpose. First, the fragmentation of the literary discourse becomes analogous to the fragmentation of the human body in its visual representations and, second, it articulates the pervasiveness, and perhaps the impossibility, of escaping representational conventions dating back to Aristotle's postulates in his Poetics.