Particle Sizes In Saturn'S Main Rings, As Revealed By Cassini-Vims, And Dynamical Modeling Of Hyperion 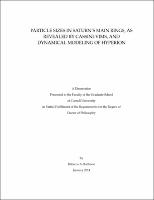 The Cassini spacecraft, which entered orbit around Saturn in 2004, has provided a wealth of observations at resolutions and geometries unavailable from Earth, thereby expanding our knowledge of the Saturnian system. In this work, I study both Saturn's extensive ring system and one of its moons, Hyperion. Previous Voyager and ground-based work had shown that Hyperion, unlike nearly all inner satellites of the giant planets, rotates asynchronously and about a non-principal axis, as a result of strongly-varying tides from Saturn. Modeling done by Wisdom et al. (1984) showed that Hyperion's rotation was also changing in a chaotic fashion over timescales of several months, making it difficult to predict the moon's past and future orientation from only the Voyager flyby. However, in 2005, Cassini performed three close flybys of Hyperion within the Lyapunov timescale. Not only did this let me construct a model of Hyperion's spin state covering much of 2005, it offered clues to Hyperion's interior structure. Because the effect of Saturn's tidal torques on Hyperion's spin depend on Hyperion's internal structure, I could rule out some internal structures if they could not reproduce the changes in spin state in 2005. In particular, a uniformdensity model produces a poor fit to observations, as do models in which the principal axes of rotation align with those expected from Hyperion's shape. Hyperion's lack of apparent in-body precession in 2005 suggests either an unlikely coincidence or that an actual principal axis of rotation is closely aligned with the spin axis. With regard to studies of Saturn's rings, Cassini's orbit about Saturn not only permits many more stellar occultations of the rings to be observed than can be seen from Earth, but allow for solar occultations of the rings, a geometry impossible to achieve from Earth. Both the actual resolution of the VisibleInfrared Mapping Spectrometer (VIMS) instrument and the resolution gained from translating the star's apparent motion behind the rings into angular resolution permit the diffraction of sunlight or starlight by ring particles to be observed, thus giving information about the size distribution of ring particles in certain areas of the rings. In this work, I measure both the minimum particle size of the A and C Rings, as well as the outermost edge of the B Ring, and the slopes of regions in the outer A Ring, C Ring, Cassini Division and outer B Ring. I find that the C Ring contains particles down to 4.1+3.1 mm in radius, with a [-]1.3 particle-size distribution that can be modeled as a power law with a differential power-law index of ~ 3.0. The outer edge of the B Ring likewise contains particles down to a radius of several millimeters, and has a relatively steep powerlaw index of ~ 3.4, making it quite different from other studies of other areas of this ring (but rather like the outer edge of the A Ring). I was also able to confirm a shallow ~ 2.8 power-law index for the ring particles in the Cassini Division. For the A Ring, I report only an upper limit on the minimum particle size of 0.6 mm for the inner and mid-A Ring, and a minimum particle size of 3-7 mm in radius in the outer parts of the A Ring. I confirm the power-law index of 2.9 to 3.0 in the outer A Ring, and discover that in the very outermost portions of the ring, the trans-Keeler region, the power-law index steepens to ~ 3.4 or even steeper. I also discovered that the effect of the A Ring's self gravity wakes - temporary aggregates of ring particles in to 50-100 m structures - makes a noticeable difference in any attempt to model the ring's particle-size distribution in the inner and mid A Ring, but that wakes appear to play little role near the edges of the two gaps in the A Ring, and at the A Ring's outer edge.