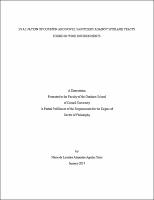 Wine is subjected to many sources of microbial contamination throughout the wine making process, including but not limited to fermentation, barrel maturation, bottling, etc. In wineries, sanitation protocols should consider not only the type of microorganisms that need to be challenged, but also the type of surface that is going to be sanitized, since contact surfaces need to be treated differently according to physical and chemical properties. In the past, chlorinated compounds were used as sanitizers in wine industry, however we now know that they can be involved in the formation of trichloroanisoles (TCA), resulting in wine defects. Chlorine dioxide unlike other chlorinated compounds does not form TCA, or at least at very low levels. However, this research concluded its poor efficacy to sanitize wine barrels, likely due to the organic nature of the barrels. Alternative sanitizers in wine industry also include: sulfur dioxide, peroxyacetic acid, hot water, steam, ozone, etc. On the other hand, Velcorin ® (Dimethyl dicarbonate or DMDC) is currently used as a wine sterilant, however, due to its high disinfection effectiveness against yeast, we investigated its potential as a sanitizer for wine contact surfaces. None of the sanitizers mentioned here have been evaluated under strict controlled and/or standardized conditions (concentration, time, kind of surface, etc.) against common wine spoilage microorganisms. This is of utmost importance for wine industry, since instituted changes should be implemented for the improvement of winery sanitation practices. We evaluated the majority of these sanitizers under both in vitro and in vivo conditions in order to validate their effective parameters. Other sanitizers were only evaluated for their in vitro or in vivo effectiveness, due to regulatory restrictions for the currently unapproved applications. Of all the sanitizers evaluated, steam treatment for 10 minutes and peroxyacetic acid at 200 mg/L for one week exposure were the most effective. During this research, an important observation was made, that Brettanomyces bruxellensis displays unique colony morphology when isolated from different sources. This wine spoilage yeast is known to cause off aromas in wines and the varying colony morphology may suggest varying susceptibilities to sanitizers, depending on morphology type.