The Gravity Of Revolution: The Legacy Of Anticolonial Discourse In Postcolonial Haitian Writing, 1804-1934. 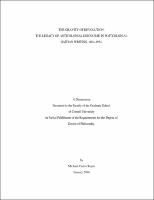 This dissertation examines the lasting consequences of the anticolonial, antislavery discourses of the Haitian Revolution on the way in which postcolonial Haitians understood the narrative structure of their national history from Independence (1804) to the end of the American Occupation of Haiti (1934). In this study Haitian intuitions of historical time are apprehended through an analysis of nineteenth and early twentieth century Haitian literary and historical works. These texts are scrutinized with respect to (a) formal narrative features such as truncation, ellipsis, elision, prolepsis and analepsis which reveal an implicit understanding of the disposition of the metahistorical categories of "past," "present," and "future" and (b) the analysis of the explicit reflections on history provided by narrators or authors. This dissertation argues, primarily, that the event of the "Haitian Revolution" (17911804) was fundamental to Haitian understandings of the emplotment of the whole of Haitian history. Chronologically "past" and "future" events were transformed so that they would be legible as analogical "recurrences" of the revolutionary past; when such manipulations proved difficult, the recent past was sometimes elided altogether. This was possible, in part, because Haitian postcolonialism was imagined as immanently precarious and thus remained dependent on revolutionary discourses of anticolonialism and radical antislavery. Also important was the analeptic, explicitly anticolonial fantasy of historical erasure in "restoring" the Amerindian name of "Haiti" to what had been the French colony of "Saint-Domingue." The national history thus came to be underwritten by an impossible anachronistic return to the time of the fifteenth century Amerindians at the moment of Independence. This dissertation alleges that Haitian historical time depended upon, and remained largely bound by, this significant anticolonial contradiction. Drawing upon this metahistorical analysis, I ultimately argue both that Haitians' experiences of time in this period are not compatible with "modernity" as it is understood by conceptual historiography, and that the accepted accounts of the historical development of nationalism cannot explain the rise of this sentiment in Haiti.