Some Excursions Into Saturn's Faint Rings 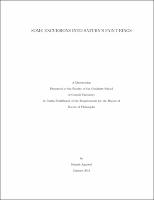 Saturn's E ring: Saturn's tenuous E ring has a double-banded vertical structure, with the density of particles depleted in the equatorial plane of the rings near Enceladus' orbit. We have conducted numerical simulations, supported by orderof-magnitude analytical calculations, to investigate how particles behave in the vicinity of Enceladus' orbit to form the observed vertical structure. We also show that the the radial double-layered Gaussian core of the E-ring [Hedman et al., 2012] is formed entirely due to gravity. Saturn's gravity, including its J2 , J4 and J6 , and effects of Enceladus are considered. The other nearby moons of Saturn are included, though our results show that they have negligible effect over the ~ 200-yr integration. We follow the orbits of particles ejected near Enceladus' southern pole with speeds ranging between ~ 0.8 to 2 times the nominal escape speed at the moon's surface (for an isolated spherical moon). We find that the combination of gravitational deceleration on launch plus the first few subsequent encounters with the moon causes many particles starting with 'escapable' velocities (just enough to escape gravitational influence) to assume an orbital inclination corresponding to a maximum height of 4rE (rE = radius of Enceladus), which gives rise to the double-layered structure. We present the short-term (1-2 days) and longer-term (~ 200-yr) dynamics of particles in Enceladus' vicinity. We argue that non-gravitational forces have little influence in the initial dynamics and formation of radial Gaussian core. Ultrafaint rings: Recent Cassini images identified three tenuous rings [Hedman et al., 2009a] along the orbits of Methone, Anthe and Pallene, three small moons whose orbits nest between those of Mimas and Enceladus. A continuous inclined ring lies along Pallene's orbit, whereas the other two satellites are constrained within arcs of limited longitudinal extents. Two of the moons, Anthe and Methone, are in strong resonances with Mimas, whereas Pallene is in a weak near-resonance with Enceladus. We investigate the longitudinal confinement of material along the orbits of the three small satellites. Anthe, Methone and Pallene along with six nearby major moons of Saturn were included in numerical simulations of particles ejected from the surfaces of these three small moons. 1000 particles were integrated with a range of initial velocities from 1 - 2 m/s from the surface of the moon in all directions with respect to the moons. The particles' trajectories were integrated for 22 years. Our simulations show that differences between the first-order resonances of Anthe and Methone, and the third-order near-resonance of Pallene, may explain the confinement of material in formal cases and the lack of confinement in the Pallene ring. We confirm and identify the resonances.