Design and calibration of optical tweezers for single-molecule studies 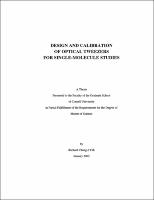 Feedback-controlled optical tweezers are used to manipulate single biological molecules in experiments on deoxyribonucleic acid (DNA) substrates. Before we trust these measurements, it is essential to know the accuracy and the precision of the device. This thesis describes the design and calibration of the optical tweezers. We measure relative displacements with nanometer accuracy and forces with an accuracy of 10%. The chief source of imprecision is in the human positioning of the sample under study. The capability of the instrument is demonstrated by stretching single molecules of DNA because of the elasticity of DNA has previously been well characterized. This thesis also compares DNA elasticity measurements made on this device with previously published data. I demonstrate that this instrument is well suited for characterizing DNA molecules that are long (~ 4000 bp), but not for DNA that are relatively short (~ 1000 bp). Fit parameters for new DNA tethers containing 4400 base pairs (bp) of DNA agree with expected values. The optical tweezers instrument is accurate enough to determine that one-hour-old 4400-bp DNA tethers have degraded, losing some 4% of their length. Our current methods are not appropriate for measurements of force-extension of short DNA molecules, such as 1155-bp DNA tethers.