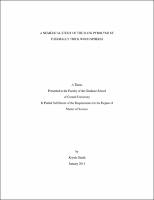 Two one-dimensional numerical simulations were developed to model the pyrolysis of wood spheres, based on the proposed model developed by Park et al., 2010. Both of these models include physical processes coupled with a kinetic mechanism that describes the pyrolysis reactions, including heat transfer within the wood particle, chemical decomposition of wood into products, and the pressure-driven flow of gas-phase species through the porous media, described using Darcy's law. The Park model used the kinetic mechanism developed by Park et al., 2010, where wood decomposes through a few parallel reactions and secondary reactions to form gas, tar, and char. The Gauthier model implements a more detailed kinetic mechanism, presented by Gauthier et al., 2013, which describes the decomposition of the main constituents of wood - cellulose, hemicellulose, and three types of lignin - and characterizes gas and tar fractions with a limited number of components. To accurately determine the ability of the model to predict the pyrolysis process, both models were configured to match the experimental conditions presented in this thesis. This included an in depth study into the external heat transfer, material properties, and some kinetic parameters from the Park model used in the simulation. Model outputs were compared to thermogravimetric analysis mass loss profiles and time-resolved temperature and species profiles of permanent gases and several light volatiles from the slow pyrolysis of dry poplar wood spheres. Model predictions from both the Park and Gauthier kinetic mechanisms matched reasonably well with experimental data, although the Gauthier model predicted a very large production of species from the desorption of chemisorbed species at higher temperatures that was not seen experimentally. Additionally, both models were generally able to predict the trends in yields of species with particle size and temperature. From this study, the following were determined: (1) The main release of gaseous products occurred before the exothermic peak seen in the temperature profiles, which supports the view that this peak is caused by the decomposition of an intermediate solid. (2) Both the Park and Gauthier models predicted a higher yield for tar and a lower yield for char than seen experimentally, which could be caused by secondary char being formed from the decomposition of tar as it moves through the biomass particle. (3) Two peaks were observed in the species profiles for CH4 at low temperatures, supporting the notion of the release of chemisorbed species that is implemented in the Gauthier model; however, this release is much smaller than predicted by the model. The development of the Gauthier model contributes considerably to numerical modeling of the pyrolysis process. This model provides detailed information on the composition of volatiles being produced through the slow pyrolysis of thermally thick particles, as well as the timing of the release of specific species. While there are many advantages to using this model to predict pyrolysis on a larger scale, there are also some disadvantages, including the difficulty in defining accurate initial and boundary conditions for the system. However, most of these difficulties are present in any detailed numerical model.