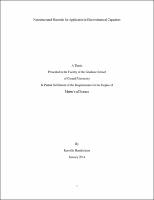 Electrochemical capacitors (EC's) are currently being investigated as primary energy storage devices due to their high power densities. Nanostructured materials with high surface area have gained significant attention in ECs where surface contributions play a significant role in the optimization of electrode performance. ECs are classified as electrochemical double layer capacitors (EDLC) and pseudocapacitors. Here we investigate the effect of surface area, morphology, and crystal size of various carbon substrates and metal oxide nanofibers on EC performance. To determine the performance in EDLC devices, the effects of morphology and pore size of various carbon systems are analyzed, which include at two types of carbon black powder samples, XC-72 and super-P, and three different graphene nanoribbons (GNR) samples. It is observed that, despite their relatively low surface area, GNRs exhibit a higher capacitance due to ease of dispersion compared with carbon black powder samples. Nickel oxide (NiO) nanofibers were synthesized through the electrospinning process to investigate the interplay between crystal morphology and pseudocapacitance performance. Electrospinning of aqueous polymer solution with high metal precursor loading, followed by thermal treatment produced highly crystalline metal oxide nanofibers. The nanofibers exhibited a tunable crystal size which increased with thermal treatment. The calcined NiO fibers thermally treated at 800C exhibited a high capacitance of 500 F/g. Finally, composite electrodes are investigated by combining the GNR samples with the NiO fibers obtained from thermal treatment at 600°C and 800°C to study the synergy between the metal oxide and GNR matrix. The inclusion of GNR increased the capacitance from ~ 500 iii F/g to ~650 F/g. Our experiments also revealed that the aspect ratio of metal oxide nanofibers and their dispersion are crucial in enhancing the EC performance. NiO crystal nanowires with small aspect ratio performed better in unfunctionalized GNR samples, while those with larger aspect ratios performed better with functionalized GNR. iv