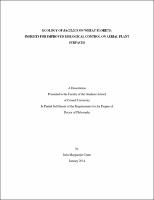 The biological control agent Bacillus amyloliquefaciens strain TrigoCor provides significant and consistent control of Fusarium head blight in greenhouse settings but not in field environments. To investigate potential ecological factors contributing to the poor performance of TrigoCor in field trials, we measured the levels of Bacillus populations and of a critical Bacillus-produced antifungal metabolite, iturin, on wheat spikes in the greenhouse and the field for 14 days post-TrigoCor application. We found that on wheat spikes in both environments, the levels of Bacillus populations remained fairly stable throughout the sampling period, but the levels of iturins declined drastically by 3 days post-application. Results from greenhouse trials and antibiosis assays indicated that the biological activity of TrigoCor-synthesized compounds was close to the minimum threshold needed for successful Fusarium graminearum inhibition and disease suppression. The decline observed for iturins on wheat spikes is therefore likely limiting for disease control, particularly in field environments where natural Fusarium infections can occur for a period of over 10 days post-anthesis. To increase the production of iturins on wheat spikes, we sought to stimulate the germination of metabolically dormant Bacillus spores present on wheat surfaces. Using the terbium chloride assay and phase contrast microscopy, we screened potential nutrient germinants of TrigoCor spores at room temperature and at 37 [MASCULINE ORDINAL INDICATOR]C, and identified two germinant combinations that produced high levels of TrigoCor spore germination in vitro. One of these germinant combinations, consisting of an equimolar mixture of L-asparagine, D-glucose, D-fructose, and potassium chloride, also produced significant Bacillus germination on wheat surfaces. However, neither germinant combination was able to significantly improve disease control with TrigoCor spores in greenhouse settings, in one case likely due to its stimulatory effect on Fusarium growth. Finally, we used epifluorescent stereomicroscopy and confocal laser scanning microscopy to visualize the spatial distribution of TrigoCor inoculum on wheat spikes post-application, and found that the coverage of inoculum sprayed onto wheat spikes in the greenhouse was much higher than that in the field. We also observed that significant inhibition of Fusarium ascospores only occurred when the spores were in direct contact with TrigoCor inoculum droplets. Inadequate spray coverage of wheat spikes in field settings may therefore limit disease control in this environment by leaving large regions of the wheat spike unprotected against Fusarium germination and colonization. Future optimization efforts for above-ground biological control with Bacillus should focus on improving in situ metabolite production by Bacillus, as well as on increasing application coverage on plant surfaces in the field. Bacillus biological control might be best suited for diseases with short, predictable infection periods or where multiple applications are feasible.