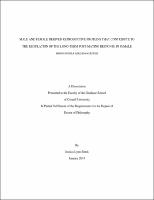 In organisms with internal fertilization, seminal fluid proteins (Sfps) are essential for the reproductive success of both sexes. In Drosophila melanogaster, Sfps are required to initiate and maintain females' post-mating responses (PMR). The Drosophila PMR include changes in egg laying, receptivity to courting males, and sperm storage. Previous studies have identified functions for only a handful of the 208 Sfps identified to date. The best-characterized Sfp is the "sex peptide" (SP), which is necessary for many of the sustained aspects of the PMR. Five other Sfps (CG9997, CG1656/1652, CG17575, and seminase) and one female protein (sex peptide receptor (SPR)) were known to be essential for SP's function to persist (the "long term response network" (LTR network)). How the LTR is modulated, however, is not understood. Here, I present studies that identified and characterized the functions of new male- and female-contributors to the PMR and LTR; these new proteins were identified by using or integrating evolutionary, molecular, mutational, and targeted gene approaches. First, I report that the Drosophila orthologs of mammalian Neprilysin proteins play a conserved role in both male and female fertility. Further, I show that in female flies the insect-specific Nep2 is important to regulate long term egg-laying, sperm storage, and sperm utilization making it an attractive target for regulation by Sfps. Second, I describe the evolutionary relationships and functions of a family of three gene duplicates, one of which encodes an Sfp that appears to have arisen by neofunctionalization and subsequent co-option of the duplicate of a female specific gene. I demonstrated that the female-expressed CG32834 is important for short term egg-laying and that this gene and the other female-expressed family member, CG9897, regulate long term receptivity whereas the Sfp, CG32833, regulates overall egg-laying. Third, I used RNAi to show LTRnetwork function for the Sfp Intrepid (CG12558), whose sequence shows evolutionary rate covariation with previously known LTR network proteins. Finally, to determine the cellular source of LTR network proteins, I examined the roles of the two cell types in male flies' accessory glands (the source of network proteins). I characterized the reproductive phenotypes of iab-6cocu males, which are deleted for an enhancer in the Hox gene Abdominal-B (Abd-B); the accessory glands of these males lack large vacuole filled secondary cells. I found that products of the secondary cells are required for long term changes in egg laying and receptivity in postmated females, and are influential during sperm competition. Further, using a secondary cell specific driver derived from the iab-6 enhancer I determined that the LTR network proteins CG1656/CG1652 and CG17575 are produced specifically in the secondary cells. Using RNA-seq data to identify genes down-regulated in iab-6cocu males combined with secondary cell specific RNAi my collaborators and I identified eight additional genes whose expression in the secondary cells is required for the LTR. Only one of these genes, CG3349, encodes a known transferred Sfp, suggesting that the iab-6cocu mutation may not primarily affect Sfps directly but instead might work through disrupting other cellular functions. Together, my results significantly increase our knowledge of the actions and origins of male and female molecular regulators of post-mating responses, as well as of the integrated roles of the cell types that produce the male regulators.