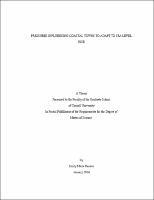 Climate change is a global problem that is going to bring about changing weather patterns and rising sea levels. While mitigation, or decreasing greenhouse gasses, is an important strategy to reduce global vulnerabilities, adaptation on the local level will help vulnerable towns maintain their viability in the face of an uncontrollable, external threat. This paper covers the sources of pressures on townlevel adaptation to sea level rise on the Eastern Shore of Maryland. In 2006, the Maryland General Assembly passed HB 1141, which required all towns that exercise local planning authority to update their comprehensive plans, the planning document that outlines the growth and development goals of the town. Towns had to include new sections about their water resources and municipal growth element. This paper comes on the heels of this legal change, where all towns had to update their plans by 2009 or lose their ability to develop new land projects, providing a ripe time to study how towns adapt. All towns had to take the time to update, and they were all doing so in approximately the same political and technological climate. Only nine towns on the Eastern Shore took this opportunity to include provisions to adapt to sea level rise. This research paper uses a two-pronged approach to understand the sources of pressures. The initial component is four case studies where the project interviewed key informants involved in the planning process and asked them about the content included in the update as well as the process they used to determine the content. All informants were directly involved in the process and worked to craft the document. Through these interviews the research project discovered themes of what the towns understood as their pressures for or against adaptation, as well as uncovered different levels of citizen participation in the process. By law the comprehensive plan must be completed with a mandated minimum of government openness and inclusion of the citizens of the town. Within the four towns studied there were three levels of participation, ranging from minimum participation to unprecedented, citizensempowered participation. The case studies uncovered themes of pressure from above, through either the Maryland State government or local county governments, pressure from within, such as through citizen action, and pressure from outside, a consultant who presented sea level rise as just another issue the town had to address. Paired with the qualitative case studies analysis was a quantitative model that used if the overarching county government had adapted, the characteristics of the town, the vulnerability level of the town to sea level rise, and their use of a consultant to predict if the town undertook adaptive efforts. These harken back to the three sources of pressure brought up by the key informants in the qualitative study: pressure from above, pressure from within, and pressure from outside. Because this research study looked at all Eastern Shore Maryland towns that were required to update, the data set was small (n=48). Results from the quantitative segment of this project suggest that towns understand and respond to their scientifically determined vulnerability to sea level rise and respond to a strong leader effect by the consultant that they hire. Paired with the issues that emerged in the qualitative segment, this is expected and probable. Further research must be conducted on other coastal towns in other states with similar enough planning authority to test if the responsiveness to vulnerability and the specific consultant is consistent in other areas. This paper concludes that the two most important features in influencing a town to adapt to an external threat are the validity of the threat to them and a hired expert who packages it as a non-controversial issue that they must address.