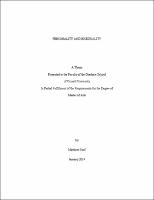 Sexual orientation is typically assumed to be independent of factors like personality. Although this is probably accurate for heterosexual and homosexual orientations, personality may play a role in bisexuality. I hypothesized that bisexuality may be potentiated by personality traits that allow sexual behavior to occur independently of an oriented predisposition to males or females. If so, such traits should be elevated in bisexual women and men. Female sexual response is relatively independent of the sex of the partner, so I also hypothesized that such relationships would be stronger for bisexual women than bisexual men. This was tested in two online studies. Study 1 (N = 828) tested for elevated levels of two relevant personality traits, sexual sensation seeking and sexual excitability. Study 2 (N = 616) did the same with sexual curiosity, and tested whether the relationship between sexual curiosity and bisexuality was independent of the Big Five. Elevated levels of sexual sensation seeking and sexual curiosity were found for bisexual women and men. Elevated levels of sexual excitability were found only for bisexual women. The predicted sex difference was found for each trait, and sexual curiosity was elevated independently of the Big Five.