Dynamical Tides And Oscillations In Star And Planetary Systems 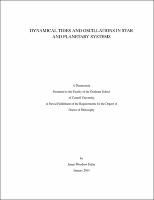 I investigate tidal interactions and global oscillations in various types of stellar and planetary systems, with a focus on dynamical tidal effects. Dynamical tides arise from the excitation of non-hydrostatic waves within the stellar components, with tidal dissipation resulting from the damping of the excited waves. The wave frequencies, characteristics, and dissipative qualities vary greatly in different types of stellar systems, as does the resultant tidally induced evolution. The first few chapters of this thesis focus on the excitation and dissipation of gravity waves within white dwarfs (WDs) in compact binary systems. I find that gravity waves are excited at composition gradients within the WDs, and may reach non-linear amplitudes in the outer layers of the star. At sufficiently short orbital periods, the waves are strongly non-linear and will break in the envelope of the white dwarf, producing efficient tidal dissipation. I show that this tidal dissipation will cause WDs to be nearly synchronized upon gravitational radiation-driven orbital decay. Moreover, the dissipation will heat the envelope of the WD, substantially increasing its luminosity and potentially reigniting its hydrogen shell to create a tidally induced nova-like event. I also study the tidal excitation of stellar oscillation modes in eccentric binary systems and in triple star systems, and I compare my theory with recent Kepler observations. In eccentric binary systems such as KOI-54, the tidal forcing excites stellar oscillation modes at discrete multiples of the orbital frequency. The resulting orbital and spin evolution produced by the damping of these modes may lead to resonance lock- ing, in which a stellar oscillation mode remains nearly resonant with the tidal forcing, producing greatly enhanced tidal dissipation. In hierarchical triple star systems such as HD 181068, the orbital motion of the inner binary can excite pressure modes in a red giant tertiary component. No stable tidal equilibrium exists for these systems, and the dissipation of the modes can cause the orbit of the inner binary to decay. Lastly, I examine the oscillation mode spectrum of giant planets with a solid core. The rigidity of the core allows for the existence of shear modes which are confined to the solid core. In a rotating planet, the Coriolis force may cause substantial mixing between core shear modes and fundamental or pressure modes that propagate in the fluid envelope. The gravitational perturbations produced by these mixed modes can excite visible disturbances within a planetary ring system, and I compare our theoretical expectations with recent Cassini observations of waves in Saturn's rings.