The Intersection Of Race And Food In The Rust Belt: How Food Justice Challenges The Urban Planning Paradigm 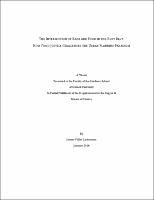 While many voices in the various contemporary food movements recognize the unsustainable and unhealthy character of the modern corporate food system, there is little work, to date, that addresses the embedded structural and institutional injustices in the food system that reinforce already-existing racialized inequities. The intersection of food and race in the urban rust belt is marked by historical and institutionalized inequality, where geographies of race, poverty, and hunger - situated in a post-industrial context - are mediated by both capitalist restructuring and the inattention of urban planners. As a reaction to the economic downturn and spatial reconfiguring that coincided with industrial production, neoliberal restructuring in the postindustrial rust belt has focused particularly on attracting capital and fostering economic growth within cities. The neoliberal restructuring of capital in the rust belt has entailed a spatial reconstruction whereby neighborhoods and bodies are intentionally managed, producing a specific kind of city where poorer neighborhoods and populations are barred from public view. Through these processes, the public gaze is directed onto "entrepreneurialized" downtowns and historic districts representing the successes of neoliberal policies in attracting capital and investment (Brenner & Theodore 2002; Wilson 2007). Provisioning of food has been rendered more invisible in the urban context where planners tend to concentrate first and foremost on the physical and land use aspects of planning. Urban relations of power are reproduced by and help to produce urban social formations, emphasizing the fundamental importance of racialized and classed spaces and the role of both affluence and whiteness in shaping not only urban geographies, but decision-making processes surrounding hunger and food. Among the many alternative food movements, a food justice approach centers its objectives on restructuring the production, distribution and consumption processes within the food system. Food justice organizing attempts to transform the food system by challenging the inequities and structural racisms reproduced through it. Food justice, like other alternative food practices, operates within - and must therefore contend with - a hegemonic neoliberal political and economic environment. Organizations are subject to the influences of market-based ideologies and the resulting promotion of individualism, selfsufficiency, and non-reliance on social services. This research explores how food justice organizing creates space for collaborate planning to reproduce resilience and solidarity within communities, rather than perpetuate social and economic instability, food insecurity, and dependence on the charity sector or welfare services. Focusing on the historical legacy of marginalization and neglect faced by urban Black communities, I explore how that marginalization is reflected in and magnified by a socially unjust and structurally racist food system. Examples of food justice activism show the possibility of shifts in the urban planning paradigm toward more intentional and collaborative food system planning processes. Throughout this thesis, I dissect the discourse and politics surrounding city planning and renewal within Syracuse and the rust belt more generally, considering to what extent normative planning processes perpetuate and exacerbate the racialized inequalities already present in the food system. I examine how the infiltration of neoliberal ideologies such as individualism, self-sufficiency, and market-based entrepreneurialism also influence the structures of and interactions between the multiple "alternative" food movements, and the tensions between official and alternative methods of food system organization. Alternative methods of city planning have the potential to reimagine the rust belt, recreating cities in such a way that they do not look back to their industrial past or economic apex with the hopes of recreating it. Rather, by creating the space for inclusive planning processes, marginalized communities can have a voice and sway over the evolution of the food landscape in their neighborhoods, and are empowered to work toward a vision of food justice that conceptualizes food as a right, rather than a privilege.