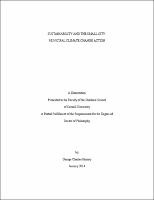 Climate change is the most important challenge facing the planet and one of the most interesting common pool resource problems. Since the climate is a non-excludable public good, the fear of free riders should dissuade rational individual municipalities from local action. Indeed, the vast majority of municipalities do not implement climate change mitigation policies. In the three papers of this dissertation, I examine policymaking in those municipalities that do choose to act on their own. First, I develop a theory of co-production and planning among local governments and across levels of authority that opens up space for examining municipal action on commons issues. I explore the framework among small and rural municipalities using three case examples that illustrate the potential for local action, but present the challenge that polycentric approaches lead to externality problems and require multilevel governance to ensure coordination and compliance. The second paper uses a survey of 1,841 municipalities to examine the role of state climate action plans and state-to-state regional climate change initiatives in creating a multilevel governance environment conducive to local action. Using a logistic regression model, I conclude that the likelihood of a municipality planning for climate change increases in a supportive multilevel environment with important differences between small and large places. The third paper uses interviews with leaders in twelve small communities, which are labeled "unlikely pioneers" because they act on climate change against the odds as calculated in the second paper. This paper examines two theories about local government action on global commons issues: public choice theory, which argues that internal factors drive action, and multilevel governance, which frames policymaking as arising from both internal and external factors. The results show support for both. Public entrepreneurs can spearhead municipal climate policies on their own by reframing global issues with an internal focus, but fiscal capacity limits response. Multilevel governance is found in places with municipally-owned utilities, which face top-down regulation. However, these municipalities have access to a stream of revenue from the utilities that enables more sustained climate change mitigation programs.