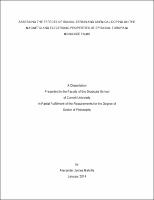 The ferromagnetic semiconductor EuO, which possesses several record properties relevant to devices, has been researched in an attempt to enhance and understand this novel material, i.e., raising its Curie temperature (TC) and developing it as a viable electronic material, by investigating three distinct research directions for EuO: chemical doping via trivalent rare-earth cations, biaxial strain via substrates with varying degrees of lattice mismatch, and preservation via application of a well-chosen capping layer. The use of Lu3+ as a chemical dopant for enhancing the TC of EuO up to 119 K was established. The spin-polarization for the Lu-doped EuO thin film was measured to be 96%, confirming its near-complete spin-polarization. The effect of biaxial strain on TC for EuO thin films that are commensurately strained to the substrate was explored. The use LuAlO3, which imparts an asymmetric tensile strain of +0.4% strain and +1.5% strain along the [110] and [110] EuO directions, respectively, resulted in the reduction of the TC for commensurate EuO / LuAlO3 thin films of varying thicknesses. The strain-dependence was confirmed by comparing the series to an identical series grown on the lattice-matched, i.e., unstrained, substrate yttria-stabilized zirconia (YSZ). Biaxial compressive strain was explored by growing EuO thin films on both singlecrystal diamonds and epitaxial diamond thin films grown on silicon. Diamond is 2.2% smaller than EuO, so epitaxial integration of EuO on diamond was attempted in hopes of achieving symmetric 2.2% compressive strain. Though the EuO was epitaxial and free of extraneous phases and orientations, demonstrating the first instance of a ferromagnet epitaxially integrated with diamond, the EuO was not compressively strained, and no change in TC was observed. Finally, the formation of a protective Eu2O3 capping layer by controlled oxidation of the surface of EuO in vacuum was studied. The Eu2O3 was effective at preventing the degradation of the underlying EuO, as determined by the scanning tunneling electron microscopy and electron energy loss spectroscopy analysis. The analysis, in conjunction with X-ray diffraction experiments, demonstrated that the oxygen diffusion during the capping layer formation is heavily influenced by the presence of defects in the film.