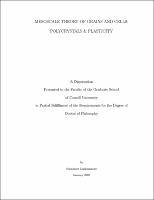 Solids with spatial variations in the crystalline axes naturally evolve into cells or grains separated by sharp walls. Such variations are mathematically described using the Nye dislocation density tensor. At high temperatures, polycrystalline grains form from the melt and coarsen with time; the dislocations can both climb and glide. At low temperatures under shear the dislocations (which allow only glide) form into cell structures. While both the microscopic laws of dislocation motion and the macroscopic laws of coarsening and plastic deformation are well studied, we hitherto have had no simple, continuum explanation for the evolution of dislocations into sharp walls. We present here a mesoscale theory of dislocation motion. It provides a quantitative description of deformation and rotation, grounded in a microscopic order parameter field exhibiting the topologically conserved quantities. The current of the Nye dislocation density tensor is derived from downhill motion driven by the microscopic Peach--Koehler forces between dislocations, making use of a simple closure approximation. The resulting theory is shown to form sharp dislocation walls in finite time mathematically described by Burgers equation---similar to those seen in the theory of sonic booms and traffic jams. Our finite-difference methods use special upwind and Fourier techniques for dealing with the shock formation. The outcomes of our simulations in one and two dimensions are in good agreement with experiment and other discrete dislocation simulations. These results provide fundamental insights into the basic phenomena of plastic deformation in crystals, and offers predictions for residual stress, cell-structure refinement, and the distinguish features of different hardening stages in plastic deformation.