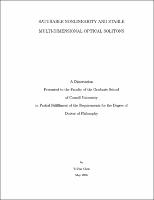 Stable multi-dimensional optical solitons have been predicted to exist in saturable instantaneous Kerr-like nonlinear systems for many years. The experimental observation of these objects is interesting scientifically and can have important applications. However, to date no experimental observation has been reported. The prospects of realizing these predicted phenomena depend on the accessibility of the nonlinear parameters in a physical feasible system. To address this question, we first develop a systematic way of determining the nonlinear properties of materials based on the previously developed spectrally-resolved two-beaming coupling measurement. This new method is used to measure the nonlinear properties of several materials. The results are used to assess the prospects of producing stable multi-dimensional optical solitons in saturable instantaneous Kerr-like nonlinear systems. We conclude that the prospects for producing three-dimensional solitons are poor. However, it is more likely to succeed in producing stable two-dimensional optical solitons.