Biologically Active Natural Products from Plants and Their Endophytes 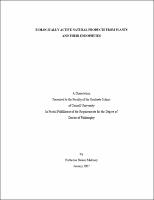 Plants and the fungi that colonize them (endophytic fungi) are prolific producers of the kinds of structurally interesting and biologically active small molecules (natural products) that captivate chemists and biologists alike. The work reported here focuses on the isolation of new natural products by two different yet complementary strategies. In the first, we sought new chemical diversity from a largely unexplored pool of biodiversity - the endophytic fungi. In the second, we examined a well-studied natural product reservoir - traditional Chinese medicinal plants - using new and innovative biological screens at the Institute of Chemistry and Cell Biology at Harvard Medical School. The isolation and structure determination of a new inhibitor of STAT3 signaling from the Floridian endophytic fungus FA39 is described. FA39 showed 97% rDNA sequence identity to the ascomycete Phaeosphaeria avenaria. Bioassay-guided fractionation of FA39 yielded the STAT3 inhibitor phaeosphaeride A, and its inactive diastereomer phaeosphaeride B. The discovery of a new family of non-templated biopolyesters from the Costa Rican endophytic fungus CR873 is described. CR873 showed 99% rDNA sequence identity to the ascomycete Daldinia concentrica. This fungus produces large amounts of oligomers of (3R,5R)-3,5-dihydroxyhexanoic acid - the first example of a eukaryote that produces biopolyesters of this nature. The isolation and structure elucidation of two new cytokinesis-inhibitory cucurbitacins using a fluorescence imaging screen is described. The new cucurbitacins were isolated from Physocarpus capitatus along with a new biphenyl and the known compounds cucurbitacin F and 23,24-dihydrocucurbitacin F. Studies into the mechanism of action of the cucurbitacins are also reported. The isolation and structure elucidation of TRPV4 channel activators and the structure elucidation of an angiogenesis inhibitor from prefractionated traditional Chinese medicinal plants are described. TRPV4 activators kaikasaponin III from Sophora sp. and linoleic acid from Stellaria sp. and Fritillaria sp. were identified without any further chromatographic separation. The diterpene dimer bisandrographolide A was isolated from Andrographis sp. after a single round of HPLC and found to potently activate TRPV4 channels. Hydroferulic acid from Stellaria sp. was identified in a screen of angiogenesis inhibitors without any further chromatographic separation. Attempts to optimize the activity of hydroferulic acid are also described.