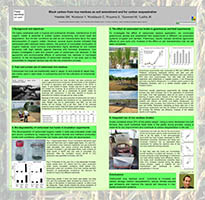 On highly weathered soils in tropical and subtropical climates, maintenance of soil organic matter is essential to sustain system productivity and avoid rapid soil degradation. But climatic conditions as well as soil characteristics favor the rapid decomposition of organic matter. However, several recent studies indicated that black carbon, the product of incomplete combustion of organic material, could combine characteristics highly beneficial for soil nutrient dynamics with high stability against chemical and microbial breakdown. Lasting soil amelioration by incorporation of black carbon from wooden plants was proposed based on the beneficial evidence from ?Terra Preta? soils in Western Amazonia. Theoretically, charred crop residues in rice-based systems could serve the same purpose but this hypothesis has never been tested. Within this context, our objectives were to 1) assess possible options for the use of charred rice residues, to 2) test the effect of charred rice residues on important soil fertility parameters and rice growth, and 3) to evaluate the effect and stability of charred rice residues in a variety of rice growing environments. Initial investigations showed that charred rice husks are already used in several Asian countries, e.g. in Japan for seed bed preparation of rice and vegetable crops, and in the Philippines for soil amelioration in ornamental plant production. Charring of rice husks in Japan is known as ?Kuntan? and simple techniques for its production are even part of agricultural training courses. First experiments showed that charring rice husks slightly increases the relative carbon content but the weight loss from fresh to charred rice husks is about 70%. Similarly to carbon, the relative concentration of other nutrient elements (e.g., N, P, K, Ca, Mg) is maintained or even increased. Greenhouse studies in pot experiments conducted in the Philippines and northeast Thailand in 2005 showed positive effects of charred rice husks on rice biomass, rice yield, and cation exchange capacity. No increased leaching of organic carbon was observed when charred rice husks were added to the soil. Randomized and replicated field trials including control treatments and +/- inorganic fertilizer treatments were established in a variety of rice-growing environments including irrigated lowlands, rainfed uplands (both in the Philippines), rainfed lowlands (northeast Thailand), and the rice-wheat system (India). In these trials, the quantity of carbon applied equaled about 1.4% in the surface soil layer (0.0 - 0.1 m) or about 16 t carbon per hectare. Converted to biomass, this is equivalent to the crop residues of about 10 to 20 seasons, depending on the system's productivity (including straw and assuming the above mentioned efficiency in black carbon production). In the first cropping season, observed agronomic effects of the charred rice husks were variable and depended on the cropping system and the indigenous soil fertility. Contrary to that, the effects on soil characteristics were more consistent and major effects were an increase of the cation exchange capacity, a decrease of soil bulk density, and a stable increase of soil organic carbon. However, preliminary results strongly suggest that a continuation of the field trials is necessary to better evaluate the long-term treatment effects. If the greater part of the applied black carbon proves to be stable in some or all tested cropping systems, this technology could be an interesting option for carbon sequestration. If used at a large scale, considerable research efforts would be needed to evaluate the various and far-reaching consequences of the proposed technology.