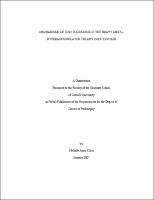 The main objective of this dissertation was to identify and examine the mechanisms conferring zinc tolerance used by the zinc and cadmium (Zn/Cd) hyperaccumulator, Thlaspi caerulescens, a plant that has been extensively studied for its altered physiology leading to increased metal tolerance and shoot metal accumulation. Three projects were carried out to address the question of extreme metal tolerance that is one of the hallmarks of this species. The first project, isolation and characterization of a putative vacuolar zinc transporter, MTP1, found higher expression of this gene in T. caerulescens compared with the related non-accumulator, T. arvense. Additionally MTP1 expression increased in response to increasing plant Zn status. When MTP1 was expressed in yeast, Zn accumulation increased; however, no strong phenotype was seen in transgenic Arabidopsis thaliana overexpressing the A. thaliana homolog of MTP1. In the second project, a T. caerulescens cDNA library was screened for genes conferring Zn tolerance to yeast when grown on high zinc media. A number of genes with widely divergent potential functions were identified including signaling, metabolic and protein regulation genes. These genes, when expressed in yeast, conferred either increased or reduced Zn accumulation, and several were chosen for whole plant studies. One specific gene of interest was PKS4, a serine-threonine kinase, which was associated with increased zinc accumulation relative to wild type yeast strains. Since other members in this kinase family have already been implicated in plant abiotic stress responses, we examined the effect of altered PKS4 expression in planta on heavy metal tolerance. Finally, T. caerulescens suspension cell lines were created and characterized for the same metal hyperaccumulation traits exhibited in the whole plant (Zn/Cd tolerance, transport and accumulation). From this work, the increased metal tolerance and altered regulation of metal tolerance genes seen in plants was observed, indicating these are traits expressed at the cellular level. We are now able to stably transform these cell lines, which opens up future work testing candidate hyperaccumulation genes using these suspension cells lines.