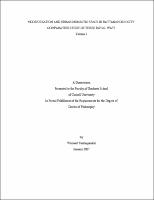 MODERNIZATION AND URBAN MONASTIC SPACE IN RATTANAKOSIN CITY: COMPARATIVE STUDY OF THREE ROYAL WATS Worrasit Tantinipankul, Ph.D. Cornell University 2007 This dissertation is about the changing physical conditions and social meanings of royal Buddhist monastic complexes (wat) in the Rattanakosin Historic District from the beginning of the Bangkok period to the 1997 economic crisis. In the pre-modern period, the royal wat was the key site for the ruler to consolidate his power and establish his legitimacy as a righteous Buddhist monarch. In this traditional context, these Buddhist monastic complexes became the centers for accumulating and redistributing wealth surplus in various forms of public facilities. With the advent of the modern era, the royal monastic complexes acquired new meanings and functions associated with the process of nation-building, becoming at once symbols of national heritage, loci for modern education, and models of development. And yet, paradoxically, because of the Thai state?s adoption of the Western philosophy of the separation of church and state, the royal monastic complexes which previously functioned as public facilities became more private and centralized under the power of the ecclesiastical authority. Moreover, the monastic land ownership and their space have largely been neglected in Bangkok?s urban planning. Monastic communities are not only invisible in the plans for Bangkok?s urban development, but they are also responsible for generating their own revenue and for the management of their monastic properties. Comparing three case studies of royal monastic complexes, I show how changes associated with the making of the modern nation-state, including government policies in the affairs of Buddhist religion, transformations in the political economy, and the urbanization of Bangkok, have affected the form and meaning of Buddhist wats. A central aim of this comparative approach is to demonstrate that these changes have not had uniform effects. Rather, as my case studies show, each of these three royal monastic complexes has responded differently to modernization and nation-building depending on the location and size of the monastic donated land, the scale of its major structures, the degree of architectural elaboration, and its social network. In conclusion, the study of problems and historical changes in each royal wat serves to pinpoint what is overlooked in current planning and preservation practice.