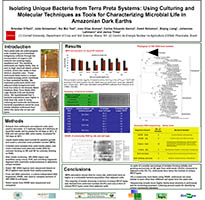 The greater fertility of Terra Preta (TP) soils is thought to be due to their high black carbon (BC) content, which contributes to increased nutrient and moisture retention, and increased pH. It is likely that the unique chemistry of BC results in distinct microbial communities involved in nutrient cycling and organic matter turnover. TP soils offer an excellent model system for studying soils containing elevated and stable BC fractions in comparison to adjacent soils, because state factors, such as mineralogy, precipitation and climate, are the same between soils at a given site. Given this we compared the microbial communities in background soils adjacent to TP sites at four locations in the Brazilian Amazon. We used a combination of culture-based and molecular techniques to characterize and identify the key members of the bacterial communities in these soils. We found that culturable bacteria were more numerous in TP soils than in adjacent background soils. Bacteria were grown on soil extract agar prepared from TP and adjacent soils and, by cross-cultivation, bacteria uniquely suited to growth on TP soil substrates were isolated. All isolates were screened by use of RFLP fingerprinting and then the 16S rDNA of unique isolates was sequenced. Clustering analysis of RFLP fingerprints indicated that isolates obtained from TP soils were more closely associated with each other than with bacterial isolates from adjacent soils within the same site. We hypothesized that TP would contain microbes that are uniquely associated with soils high in BC as compared to adjacent soils and that these organisms would have more phylogentic simlarity to each other across TP sites than in comparison to their corresponding adjacent soils. Of sequenced organisms most fell within the groupings Firmicutes, High G+C actinimyces, alpha-proteobacteria and gamma-proteobacteria, but only 18% had matches in the database above 97% and only 4% of sequences above 99% similarity. Finally we compared phylogenies of sequences obtained from individual soil isolates with those obtained from cloning and sequencing DNA from PCR-DGGE gels. Results from both approaches show a greater homology between sequences obtained from the four TP sites than between sequences obtained from adjacent and TP soils from the same site. By combining culture-based and culture-independent molecular techniques we obtained a more complete analysis of the suites of organisms unique suited to soils rich in BC. Black carbon is widespread in the environment and, once created, persists over long time scales. Knowledge of the ecology of TP soils may contribute to a broader understanding of the behavior of BC in natural environments and its possible use in agricultural systems to improve soil fertility.

Poster presentation from the 2006 World Congress of Soil Science in Philadelphia, PA