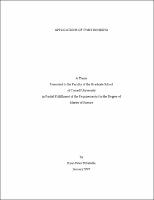 Two processes have been developed by which twist boundaries may have useful application. The first of these, the compliant universal substrate, attempts to utilize a twist boundary to allow the growth of large lattice mismatch, low defect density heteroepitaxial layers. The second, the periodic template, attempts to use the periodic stress fields inherent in a twist boundary to produce two-dimensional surface topography with a very fine, and controllable, periodicity. One sample of germanium grown on a silicon compliant substrate was analyzed in a JEOL 1200EX transmission electron microscope. The analysis showed that the twist boundary was not present in all regions of the Si-Ge interface. In those regions where the twist-bonded layer was observed, it was established that the Ge crystal was rotated approximately 45 degrees from the underlying bulk Si wafer. In those regions where the layer was not present, no such rotation was observed. Due to the small size of the domains in which the compliant layer was present or absent, strong conclusions with respect to its effect on defect densities can not be drawn. High magnification investigations of the twist bonded layer showed that it does exhibit a roughly periodic internal structure. Attempts were made to fabricate periodic templates with silicon, gallium arsenide, and gold bicrystals. Twist bonding of gold proved to be the most successful of the three materials. Gold films were sputtered epitaxially onto sodium chloride crystals at 450 degrees C and subsequently annealed for one hour at 600 degrees C. Two films, one approximately 500 nm thick and one approximately 20 nm thick, were bonded together in a hot press at ~1.0 MPa at 300 degrees C for 1.2 hours. The misorientation angles of these bicrystals were kept below 5 degrees to maintain a reasonable dislocation spacing. The bicrystals were then characterized using the JEOL 1200EX TEM and a Nanoscope III atomic force microscope. Small amplitude surface modulations whose periodicity matched that of the underlying dislocation structure were observed.