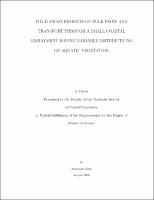 This thesis is largely the documentation of two passive tracer release studies performed in Sterling Pond (SP), a small embayment on the southern coast of Lake Ontario (LO). SP has a large watershed and is strongly connected to LO by a long and narrow channel. The experiments were designed to decipher the effects of aquatic vegetation (macrophytes) on flow and transport through SP and through shallow embayments dominated by macrophytes in general. Towards this objective, the studies captured the residence time distribution (RTD) of water entering SP from its watershed under two different spatial distributions of macrophytes, and they were conducted in synchrony with extensive surveys of macrophyte density, height, and species composition. Variables relevant to the dynamics of SP were continuously monitored at its boundaries, including meteorological conditions, water surface elevation, flow, and temperature (temperature was continuously monitored within SP as well); bathymetric data was collected once. The first study took place when watershed flow was high and macrophytes were sparse -- mean residence time was measured to be 0.6days. The second took place under moderate barotropic forcing from LO when watershed flow was low and macrophytes were dense and uniform across SP -- mean residence time was measured to be 20days. As the studies were conducted under fairly extreme environmental conditions, the measured RTD's roughly capture the range of residence time scales of water entering SP from its watershed. The tracer experiments, macrophyte surveys, and auxiliary data comprise a benchmark data set that may be used for development and validation of numerical models of flow through flexible vegetation.