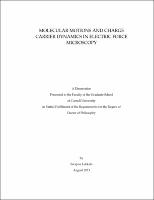 Since its invention in 1981 [4] by Gerd Binnig and Heinrich Rohrer, scanning probe microscopy is used to image a surface by probing various sample properties at resolutions from 100 nm to 1 Angstrom. In this work, the measurements of electric force microscopy where a cantilever oscillates above the sample are studied. A theoretical framework to calculate the experimental observables, noncontact friction and cantilever frequency fluctuations, is provided. The dynamical fluctuations probed by electric force microscopy are shown to be related to sample properties such as dielectric fluctuations, carrier dynamics, and Coulomb interactions between charge carriers. The theoretical calculations are compared to the measured data and found to be within reasonable error, on organic thin films, organic transistor and doped Si samples. The cantilever frequency noise on organic thin films is shown to be from the dielectric fluctuations. A semi-infinite semiconductor is used as a model to study the effect of dielectric fluctuations, carrier dynamics, and inter-carrier interactions on frequency noise. A semi-infinite semiconductor model was developed which predicts a suppression in frequency noise with increase in carrier density, in disagreement with noise measurements on organic transistor where the frequency noise is independent of carrier density. The semi-infinite model is therefore extended to a layered structure, enabling the evaluation of the effects of finite thickness of semiconductor and the confinement of the charge carriers to few monolayers close to the semiconductor-insulator interface in organic transistor. The layered structure explains the cantilever frequency noise measurements on an organic transistor, and predicts that noncontact friction measurements can be used to assess the effects of inter-carrier Coulomb interactions on charge motion in organic semiconductors. Noncontact friction data on doped Si has a one-over-square root dependence in charge density that is also explained by our semi-infinite model.