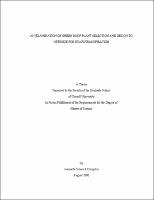 Green roofs are a new and growing field in North America. Along with the need for innovation in design, research on green roof systems and performance is necessary to capture and improve the way in which green roofs function. Green roof performance and benefits have traditionally been measured by their ability to capture storm water, cool the building below it by means of shading and evaporative cooling, and their ability to successfully support plant life. Currently, green roofs design is dominated by shallow, light weight substrates and extremely drought tolerant plants, often from the Crassulaceae. This design predilection is based upon the limiting factors of building loading limits and installation costs. However, this design negates most of the benefits green roofs are expected to provide. Water holding capacity, and thus the green roof?s ability to retain significant volumes of storm water, is contingent on the depth of the substrate. By selecting plant species which are highly drought tolerant, the evapotranspiration rates are reduced. Additionally, many members of the Crassulaceae have an inverted stomatal rhythm wherein stomates are open at night to permit gas exchange with the atmosphere when transpirational demand is low and when cooling of the building is less needed. Therefore, a shift in focus is necessary, in which the design of green roofs is based on optimizing the performance of desired benefits. While limitations in cost and loading must be accounted for, they should not be the driving force of green roof design. In response to this issue, this thesis examines an alternative approach to conceptualizing and designing green roofs. The following research presents a green roof system that held all storm water to the point of full saturation. Additionally, plant species capable of withstanding both drought and flooding were placed in a green roof setting. Evapotranspiration rates were recorded for Solidago canadensis and Spartina alterniflora during the summer of 2005, applying measured volumes of water to test the system?s ability to hold large volumes of water as well as the rate at which this water could be used by the plants. Full capacity of the substrate averaged approximately a 2-year return frequency storm for New York City, at 3 inches of water over a 24 hour period. Both plant species were capable of consuming enough water to shift from saturation to no levels of standing water within 4 days, suggesting the system?s ability to withstand several rain events in succession. The rates of evapotranspiration slowed as less water was present in the substrate, suggesting that the plant species could survive a prolonged period of drought by adjusting water usage. By storing greater volumes of water within the substrate, larger volumes of water were made available to the plant, reducing the need for more frequent rainfalls. Ultimately, this system exhibits a tolerance of drought and flooding and provides greater opportunity for plant survival, as compared to a freely draining, more drought-prone green roof design approach. While the studies conducted were for small units embedded within a larger green roof, and data was collected for a short period, the results suggest that this approach has immense potential in improving green roof benefits, and warrants further study.