Early Modern Culture And The Economy Of Masochism 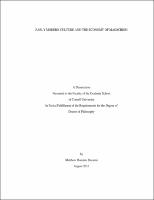 In this project, I examine the relationship between pain and pleasure on the early modern stage. I argue that this dynamic can be called a kind of proto-masochism. I also claim that this new form of masochism takes its logic and much of its language from the emerging early modern market. I chart the course of this development by reading a number of early modern plays and poems. I begin with Shakespeare's The Merchant of Venice, discussing how Jessica and Antonio both express masochistic desire in different ways. I then turn to the notion of wittols - willing and eager cuckolds - in Middleton's A Chaste Maid In Cheapside. I finally end the project by discussing Ben Jonson's Bartholomew Fair, a play that forges a masochistic relationship between the audience and stage, and hints at the idea of masochistic spectatorship.