The Political Economy of Transition in Laos: from Peripheral Socialism to the Margins of Global Capital 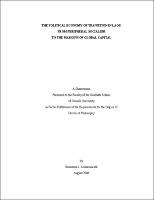 The Political Economy of Transition in Laos.pdf   (2.248Mb)

Remarkably, in the view of some observers, a poor and relatively weak government in Laos survives as a one-party state, even as it transforms the country?s political economy in response to declining communist fortunes in the early 1990s and the onslaught of economic globalization. How has the Lao government managed the socialist transformation and capitalist incorporation, while maintaining some semblance of external sovereignty and internal legitimacy? Through the broad lens of political economy and sociology, my research addresses this question, in exploring three areas of Lao state capacity: (1) political structure, (2) public administration, and (3) fiscal management. I rely on several sources: a set of observations during my time on research assignment in Laos (May 2004-April 2005); an examination of governance-related, donor-funded development projects; an exhaustive survey of government laws, regulations, and documents since the reform period; and a review of literature on the political economy of development, market transition, and globalization. To assess different points of view on contemporary Laos, I conducted open-ended interviews with selected Lao officials, townspeople, expatriates, international consultants, and members of the diplomatic and donor communities. From my research, evidence suggests that the Lao government actively promotes political, administrative, and economic centralization over regionally dispersed and fiscally independent provinces. In the transition process, a strong central government capable of regulating and enforcing economic governance has gradually eroded traditional autonomy of Lao provincial authority. The recent history reveals a party apparatus pragmatically adjusting to economic constraints, while consolidating its power base, unifying the country, and exerting its centralizing influence on an ideologically indifferent countryside. Laos is not an isolated case. For many developing countries struggling to build a unitary state and a national economic space of private exchange, centralized control over regionally autonomous regions constitutes one of the major governance challenges of nationally guided development. Contrary to the general global trend of public decentralization in the transition process, Laos provides a stark contrast, offering a valuable insight into the important role of governments in structuring economic relations.