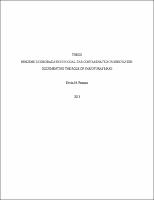 © 2013 Kevin M. Posman ! ABSTRACT Microbial processes shape ecosystem functions and the fate of environmental Contaminants. Despite their importance little is known about the active players carrying out specific metabolic processes in the environment. Investigations of environmental microbial communities are crucial for understanding the diversity of microorganisms capable of degrading these compounds and will provide insight into bioremediation strategies. The aim of this study was to use cultivation-dependent and cultivation-independent techniques to examine benzenedegrading microorganisms in hydrocarbon-contaminated groundwater. We investigated groundwater samples from a coal-tar contaminated aquifer in South Glens Falls, NY undergoing monitored natural attenuation (MNA). Previous stable isotope probing (SIP) experiments using 13 C-labelled benzene in groundwater microcosms from the site revealed a high abundance of !- and "-proteobacteria were active in the biodegradation of benzene. To further explore the microbiology of this system, we isolated benzene-degrading microorganisms from the SIP microcosm experiments. Nine organisms were isolated and identified using 16S rRNA gene sequences and several shared >97% nucleotide identity to 16S rRNA gene sequences retrieved in the SIP experiments. Isolate Variovorax MAK3 was chosen for further characterization. We designed primers to investigate a putative ring-hydroxylating dioxygenase (RHD) hypothesized to be involved in its ability to degrade benzene. We demonstrated that Variovorax MAK3 accelerated benzene degradation microcosms prepared from site waters and quantified a corresponding increase in Variovorax RHD gene expression over the same time period. Finally, we show that when the native community was exposed to benzene the ratio of RDH dioxygenase to 16S rRNA gene transcripts of native Variovorax populations increased over 6 fold during the benzene biodegradation. These data demonstrate how the convergence of cultivation-dependent ! and cultivation-independent techniques can lead to a precise understanding of active populations and their biodegradation genes in complex microbial communities. !