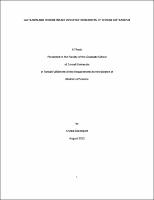 This study examined the influence of lactation, and choline intake during lactation, on biomarkers of choline metabolism. Lactating (n=27) and control (n=21) women were randomized to 480 or 930mg choline/d for 10-12 wks; Blood and urine were collected for choline metabolite (and enrichment) measurements while blood leukocytes and mammary epithelium were collected for gene expression analysis of choline metabolic genes. Lactating (vs. control) women exhibited elevated plasma choline and betaine; decreased urinary excretion of betaine and dimethylglycine; and increased leukocyte transcript abundance of CHDH. A higher choline intake by lactating women yielded higher plasma betaine and dimethylglycine, higher serum sarcosine, and higher milk glycine. These data collectively suggest that lactation induces metabolic adaptations to increase the supply of betaine perhaps secondary to its role as an osmolyte, and that extra choline during pregnancy increases metabolites that may be important in milk synthesis. Dedicated to Him iii.