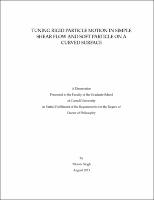 This thesis focuses on problems in microhydrodynamics involving both rigid and deformable particles. Two problems deal with the rotational behavior of thin particles at low aspect ratio in linear flows. Two other problems focus on studying the collision and aggregation dynamics of non-spherical particles. Another problem involves studying the motion of a deformable particle on a rigid curved surface. In chapter 2, the ideal collision rate of cylindrical particles of circular crosssection in simple shear flow is studied. The work extends Smoluchowski's results for spherical particles to cylindrical particles. Asymptotic solutions are obtained for collision rate of particles of very large and very low aspect ratio. Numerical simulations are performed to obtain collision rate of particles of finite aspect ratio. In chapter 3, the rotational behavior of thin disks in linear flow at low Reynolds number is studied. Using numerical simulations and asymptotic analysis, the work estimates the effective aspect ratio of thin particles. In chapter 4, a class of rigid thin particles is identified which stops rotating in simple shear flow. Numerical simulations and analytical results are used to estimate the aspect ratio at which the particle stops tumbling and the angle at which the particle will align. In chapter 5, aggregation kinetics of red blood cells in the presence of macro- molecules is studied. Experiments are performed to study red blood cell dimer formation in microchannels to estimate the dependence of rate constant of aggregation of deformable particles on shear rate and macromolecule concentration. In chapter 6, dynamics of a deformable particle on a rigid curved surface is studied. It is shown that the colloidal interaction energy of a deformable particle on a rigid surface can be tuned by tuning its curvature. Migration velocity of the particle on the rigid surface due to its change in curvature is estimated analytically in some asymptotic limits.