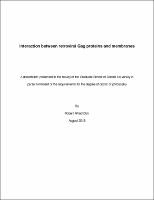 Assembly of an infectious retroviral particle (virion) involves a set of events, including multimerization of thousands of Gag proteins, packaging of two copies of genomic RNA, and Gag interaction with the plasma membrane. While each of these events can be thought of as discrete, they are dependent on one another. The Gag polyprotein has three major domains: the N-terminal membrane-binding domain (MA), the central assembly domain (CA), and the C-terminal nucleic acid (or genomic RNA) binding domain (NC). According to one model for formation of virions, NC binds to genomic RNA, which promotes Gag multimerization, which in turn enhances membrane interactions. The work described in this thesis focuses on two aspects of this model, the response of Gag to lipids with different head groups and acyl chains, and the effect of multimerization of Gag on its interaction with membranes. In a comparative study of Rous sarcoma virus (RSV) and human immunodeficiency virus type-1 (HIV-1) Gag, we found that, unlike HIV-1 Gag, RSV Gag was not dependent on the lipid phosphatidylinositol-4,5-phosphate (PI(4,5)P2) for membrane interaction and virus release in vivo. However, both Gag proteins had a similar response to mono-, di, and tri-phosphorylated phosphatidylinositols (PIPs) by an in vitro liposome flotation assay. I interpret these findings to suggest that in addition to         the specific interaction reported for HIV-1 Gag, PIPs enhance Gag membrane binding electrostatically. In a follow-up study I found that increasing the concentration of phosphatidylserine (PS) in the membrane resulted in dramatically more HIV-1 Gag binding, and this response to PS was modulated by the lipid acyl chains. Also, the presence of cholesterol in the membrane significantly increased the amount of Gag associated with the liposomes. I interpret these results to mean that Gag can sense the hydrophobic core of the lipid bilayer. To determine the effect of Gag multimerization on its binding to membranes, monomeric, dimeric, and hexameric MA chimeras were tested. In vivo and in vitro, increasing the multimeric state of MA increased its localization to the plasma membrane and to liposomes. These findings suggest that Gag binding to the plasma membrane is enhanced by multimerization.