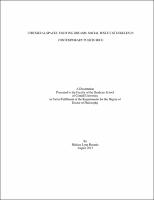 The premise of this dissertation is that ephemeral spaces serve as practice ground for enacting fleeting moments of autonomy. My narrative centers the ephemeral nature of political possibility, doing so in a way that attempts to preserve the undecidable directionality of these moments. Focusing on occupation as a tactic of resistance, I discuss two contemporary manifestations I witnessed while in Puerto Rico from 2009-2011: the 62 day system wide student strike organized in 2010 at the University of Puerto Rico and El Campamento Playas Pa'l Pueblo, a squat founded in 2005 to prevent the privatization of a parcel of public coastal land. I call these spaces liberation experiments to underscore my interest in understanding them as part of the project to achieve self-determination for Puerto Ricans. Although there is some debate as to whether Puerto Rico is a colony in the strict sense of the word, since it was "decolonized" when it became a commonwealth of the United States, it still remains the case that such a relationship of over a century of partial integration to the United States has perverted the political terrain. By linking these queries into the micropolitics of resistance spaces to Puerto Rico's nonsovereign political terrain, I argue that these ephemeral space/times have political implications that go beyond efforts to shift modes of organizing to prefigurative action emergent across the globe. My project is to reclaim the term revolution in Puerto Rican Studies as a terrain that lies outside the traditional trajectory of nation-state formation and status debate and am keen to show how efforts to build ephemeral spaces of resistance assist participants in experimenting partial breaks, ruptures and gaps from what Nelson Maldonado Torres calls, "coloniality of being." This work builds upon the anthropology of social movements where scholars have done much to emphasize the mundane aspects of organizing, focusing on the affects and ambivalences produced by resistance work. In each chapter, I attend to the way political possibility is experienced and effaced in the intimate moments of struggle. However, my claim to the importance of the ephemeral in our theorizations of social movements is drawn from Caribbeanist, feminist and queer genealogies that posit alternative conceptualizations of temporality and aim to deconstruct transcendental models of History. By writing experimentally, prioritizing the storytelling and affective domain of living a moment of revolutionary possibility, I amplify the poetics of resistance space. I am not interested in making temporary encampments "more familiar" to the reader but rather in transferring some of that affect to readers through writing. In emphasizing the "poetics," I underscore that I am invested in producing a text that evokes memories, embodied realizations of my experience in the field-a place that is also my ancestral home(land). In attending to the poetics of ephemeral spaces of resistance, I aim to subvert what J.K. Gibson-Graham identify as "left melancholia" evidenced by our tendency to critique to the point of paralysis, instead stimulating our knowledge of the realm of the possible which emerge within the impossible conditions in which we live.