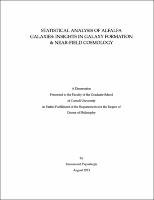 The Arecibo Legacy Fast ALFA (ALFALFA) survey is a blind, extragalactic survey in the 21cm emission line of atomic hydrogen (HI). Presently, sources have been cataloged over [ALMOST EQUAL TO]4 000 deg2 of sky (~60% of its final area), resulting in the largest HI-selected sample to date. We use the rich ALFALFA dataset to measure the statistical properties of HI-bearing galaxies, such as their mass distribution and clustering characteristics. These statistical distributions are determined by the properties of dark matter on galactic scales, and by the complex baryonic processes through which galaxies form over cosmic time. As a result, detailed studies of these distributions can lead to important insights in galaxy formation & evolution and near-field cosmology. In particular, we measure the space density of HI-bearing galaxies as a function of the width of their HI profile (i.e. the velocity width function of galaxies), and find substantial disagreement with the distribution expected in a lambda cold dark matter ([LAMDA]CDM) universe. In particular, the number of galaxies with maximum rotational velocities vrot [ALMOST EQUAL TO] 35 km s[-]1 (as judged by their HI velocity width) is about an order of magnitude lower than what predicted based on populating [LAMDA]CDM halos with modeled galaxies. We identify two possible solutions to the discrepancy: First, an alternative dark matter scenario in which the formation of low-mass halos is heavily suppressed (e.g. a warm dark matter universe with keV-scale dark matter particles). Secondly, we consider the possibility that rotational velocitites of dwarf galaxies derived from HI velocity widths may systematically underestimate the true mass of the host halo, due to the shape of their rotation curves.In this latter scenario, quantitative predictions for the internal kinematics of dwarf galaxies can be made, which can be checked in the future to probe the nature of dark matter. Furthermore, we take advantage of the overlap of ALFALFA with the Sloan Digital Sky Survey (SDSS), to measure the number density of galaxies as a function of their "baryonic" mass (stars + atomic gas). In the context of a [LAMDA]CDM cosmological model, the measured distribution reveals that low-mass halos are heavily "baryon depleted", i.e. their baryonic-to-dark mass ratio is much lower than the cosmological value. These baryon deficits are usually attributed to stellar feedback (e.g. supernova-driven gas outflows), but the efficiency implied by our measurement is extremely high. Whether such efficient feedback can be accommodated in a consistent picture of galaxy formation is an open question, and remains one of the principle scientific drivers for hydrodynamic simulations of galaxy formation. Lastly, we measure the clustering properties of HI-selected samples, through the two-point correlation function of ALFALFA galaxies. We find no compelling evidence for a dependence of clustering on HI mass, suggesting that the relationship between galactic gas mass and host halo mass is not tight. We furthermore find that HI galaxies cluster more weakly than optically selected ones, when no color selection is applied. However, SDSS galaxies with blue colors have very similar clustering characteristics with ALFALFA galaxies, both in real as well as in redshift space. On the other hand, HI galaxies cluster much more weakly than optical galaxies with red colors, and in fact "avoid" being located within [ALMOST EQUAL TO]3 Mpc from the latter. By considering the clustering properties of [LAMDA]CDM halos, we confirm our previous intuition for an MHI -Mh relation with large scatter, and find that spin parameter may be a key halo property related to the gas content of present-day galaxies.