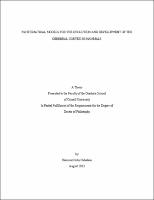 This is a pivotal time in neuroscience as modern imaging techniques and methods in network reconstruction are elucidating the structure of the brain as never before. Ultimately, our insights into these networks of connections will be the foundation for a better understanding of cognitive function and dysfunction in humans and other species. Comprehending why these structures are as we find them can be helped by knowing their developmental programs. Mathematical models will play a key role in understanding how developmental programs are orchestrated by the genome and refined by evolution to construct the brain. In this thesis I present mathematical models for two early stages of the development of the cerebral cortex in mammals: neurogenesis and the emergence of early network structure. Both models are informed by empirical developmental and anatomical data. The first, an ordinary differential equation model for the kinetics of cortical neurogenesis, shows how those kinetics shape the basic architecture of the cortex. A massive increase in the number of cortical neurons, driving the size of the cortex to increase by 5 orders of magnitude, is a key feature of mammalian evolution. Not only are there systematic variations in the cortical architecture across species, but also within a given cortex (affecting the type of information processing which happens in each part of the cortex). The mathematical model presented here accounts for both the cross-species and within-cortex variation as arising from the same developmental mechanism. For the second model, data from an axon-tracing study in rodents informs a network model of early connectivity between neurons in the cerebral cortex. Analysis of the model shows that early axon out-growth has an anisotropic spatial distribution which reduces the volume occupied by the axons without causing a significant decrease in the efficiency of the resulting network. Moreover, the preferential connectivity observed along the medial-lateral axis of the cortex my seed the emerging layout of the cortical areas which are specialized for various types of information processing.