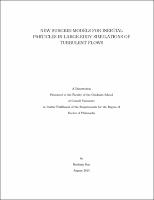 An initially uniform distribution of inertial particles will spontaneously organize themselves into clusters in a turbulent flow, driven primarily by the small-scale turbulent fluctuations. Accurate prediction of such clustering of inertial particles, along with their relative velocity statistics, is essential for computing their binary collision rates, an important quantity that determines the evolution of the size distribution of these particles, under conditions when collisions lead to agglomeration or coalescence. In large-eddy simulations (LES) of turbulent flows, only the largescale turbulent fluctuations are represented on the grid whereas the small-scales (or subgrid scales) need to be modeled. None of the existing LES subgrid models are able to accurately predict the particle collision rates across the entire range of particle inertia, where inertia is parameterized by the Stokes number (St) defined as the ratio of the particle response time to the Kolmogorov time-scale ([tau][eta] ). In this work, we present new subgrid models designed to recover the clustering and relative velocity statistics of inertial particles. We begin by considering the effect of the subgrid scales on our statistics of interest. We do this by analyzing the exact distribution of particles obtained from direct numerical simulations (DNS) and comparing them with the ones obtained from a filtered DNS (FDNS). FDNS is obtained by filtering out the 'subgrid' scales and represents a 'perfect' LES with an exact representation of the large-scales (free of any subgrid modeling error). This provides a benchmark study and points to the need of incorporating the mech- anism by which the small-scales affect particle statistics, into the LES subgrid models designed to recover clustering and relative velocities of inertial particles. We then consider a subgrid model based on kinematic simulations of turbulence (so-called KSSGM), and show that it can accurately predict the relative velocity statistics for all St, but can capture clustering only for St [GREATER-THAN OR EQUAL TO] 2.0. We investigate the reasons for its failure to predict clustering at St < 2.0, and identify the important small-scale statistics that a subgrid model needs to predict in order to capture clustering correctly. We conclude that none of the existing subgrid models are capable of recovering the necessary small-scale statistics, and recognize the difficulty in doing so in a single-particle framework. We therefore shift our attention to a two-particle framework, based on the understanding that clustering is driven by two-point dynamics, and the recognition that all of the existing theories of particle clustering and collisions are formulated in this framework. We then develop a novel satellite particle simulation (SPS) methodology that allows us to efficiently simulate pair-wise interactions of particles in turbulence, thereby providing an ideal test-bed for the development and testing of two-particle models. We derive models from existing theories of inertial particle clustering primarily focussing on low St, and test them using the SPS. We analyze a class of models, that are referred to as Drift-Diffusion Models (DDMs), and show how they can be derived from statistical mechanical theories of clustering. We consider the theories by Chun et al. (2005) (CT) and Zaichik and Alipchenkov (2009) (ZT). We show that the DDM-CT gives good results for St [LESS-THAN OR EQUAL TO] 0.05, whereas the DDM-ZT works well for St [LESS-THAN OR EQUAL TO] 0.2. Such models represent an entirely new framework for subgrid modeling of inertial particle motion in a LES, and the initial results provide strong evidence regarding the viability of such an approach. Finally, we discuss some issues related to implementing these two-particle models in a single-particle tracking framework.