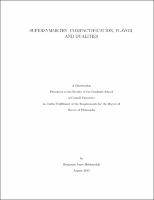 We describe several new research directions in the area of supersymmetry. In the context of low-energy supersymmetry, we show that the assumption of R-parity can be replaced with the minimal flavor violation hypothesis, solving the issue of nucleon decay and the new physics flavor problem in one stroke. The assumption of minimal flavor violation uniquely fixes the form of the baryon number violating vertex, leading to testable predictions. The NLSP is unstable, and decays promptly to jets, evading stringent bounds on vanilla supersymmetry from LHC searches, whereas the gravitino is long-lived, and can be a dark matter component. In the case of a sbottom LSP, neutral mesinos can form and undergo oscillations before decaying, leading to same sign tops, and allowing us to place constraints on the model in this case. We show that this well-motivated phenomenology can be naturally explained by spontaneously breaking a gauged flavor symmetry at a high scale in the presence of additional vector-like quarks, leading to mass mixings which simultaneously generate the flavor structure of the baryon-number violating vertex and the Standard Model Yukawa couplings, explaining their minimal flavor violating structure. We construct a model which is robust against Planck suppressed corrections and which also solves the [MICRO SIGN] problem. In the context of flux compactifications, we begin a study of the local geometry near a stack of D7 branes supporting a gaugino condensate, an integral component of the KKLT scenario for Kähler moduli stabilization. We obtain an exact solution for the geometry in a certain limit using reasonable assumptions about symmetries, and argue that this solution exhibits BPS domain walls, as expected from field theory arguments. We also begin a larger program of understanding general supersymmetric compactifications of type IIB string theory, reformulating previous results in an SL(2, R) covariant fashion. Finally, we present extensive evidence for a new class of N = 1 gauge theory dualities relating different world-volume gauge theories of D3 branes probing an orientifold singularity. We argue that these dualities originate from the S-duality of type IIB string theory, much like electromagnetic dualities of N = 4 gauge theories.