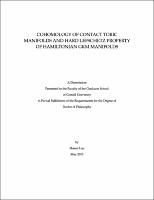 This thesis consists of two parts. Each part solves a topological problem in equivariant symplectic geometry using combinatorial methods. The classification problem of sympletic toric manifolds was solved by Delzant [Del88] and their cohomology rings were later computed in various ways by Davis-Januskiewicz [DJ91] and Tolman-Weitsman [TW03]. Contact toric manifolds are the analogue of symplectic toric manifolds. The classification problem was solved by Lerman [Ler03a]. In the first part of the thesis, we compute the cohomology ring of contact toric manifolds utilizing techniques in [DJ91]. The equivariant cohomology of Hamiltonian GKM manifolds can be computed as the graph cohomology of their GKM graphs. The combinatorial properties of GKM graphs were studied by Guillemin and Zara [GZ99], [GZ01]. In the second part of this thesis, we study the graph cohomology for a more general class of graphs and prove many properties about it. The most interesting one of these is a weak version of the Hard Lefschetz Property (HLP). It was known that HLP always holds for K¨ hler manifolds, but generally may fail for symplectic manifolds. a Hamiltonian GKM manifolds are symplectic but generally not K¨ hler. Our result a provides a new class of manifolds for which a weak version of HLP holds.