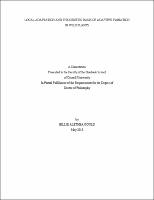 The phenomenon of local adaptation is a key player in the evolution of plants, which are shaped by their environments perhaps more than any other organismal group. Botanists have often demonstrated adaptive trait differences between plant populations in different environments, and the concept of the "ecotype" was itself coined by an early plant biologist (Turesson, 1922). We continue striving to understand how the push and pull of selection and gene flow across heterogeneous environments contributes to the maintenance of genetic diversity and influences fundamental aspects of species biology such as geographic distribution, morphological diversity, and population response to environmental change. Understanding how often and why local adaptation occurs is an area of research that links both basic and applied branches of plant biology. In my dissertation I address fundamental questions regarding local adaptation in plants including: 1) What is the prevalence and role of local adaptation in determining the geographic distribution of a species; 2) What are the genes involved in local adaptation in the wild; and 3) do adaptive phenotypes evolve by similar genetic pathways in related species with different histories of selection. To address the first question, I examined the role of trait differentiation in range boundary formation in the annual wildflower Clarkia xantiana ssp. xantiana. To explore the second and third questions, I examined patterns of local adaptation and its genetic basis in the temperate grass Anthoxanthum odoratum. I iii focused on the ecologically and agriculturally important trait of tolerance to aluminum in acid soils. In C. x. ssp. xantiana I have shown that adaptive differentiation between populations is common. Counter to theoretical expectations however, local adaptation to conditions at the range edge does not preclude the existence of substantial heritable trait variation there and is thus unlikely to restrict adaptation to conditions beyond the range edge. In A. odoratum local adaptation is also prevalent even at the small spatial scale of experimental plots within a single hay meadow at the long-term ecological Park Grass Experiment. Using genomic techniques, I demonstrate that adaptation to soil Al stress in this wild grass has many genetic similarities to cultivated grasses, but also likely involves previously undescribed genetic pathways. Both novel and canonical pathways are also likely to have been the targets of selection during the process of local adaptation during the history of the experiment. In combination, these studies reaffirm the prevalence of local adaptation in nature, but they also demonstrate that simple theoretical predictions about the exitence of local adaptation, its genetic basis, and its ecological consequences are suspect. Direct studies of adaptive traits and their underlying genes in diverse organisms will continue to be critical for understanding the true nature of the complex interaction between selection, gene flow, and genetic architechture to produce what we observe in the natural world. iv