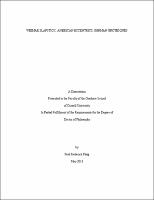 In Weimar Slapstick: American Eccentrics, German Grotesques I examine the wide-ranging popularity of American slapstick film in Germany's Weimar Republic (1919-1933). With its gag-driven narratives, mechanically energized stars and urban, industrial mise-en-scène, slapstick spoke directly to the fears and desires of Germany's first democracy. Using this uniquely American, uniquely cinematic response to modernity as a lens, I offer a transnational account of Weimar culture, with slapstick refracting sites ranging from the film palace to the cabaret, Bauhaus design to modernist text. For those who celebrated the genre, slapstick's shocking, playfully curious humor challenged the traumas and cynicisms that would consume the Republic and which, moreover, still dominate scholarship on this era and its legacy. I approach slapstick cinema against the background of both Weimar Germany's obsession with all things American as well as grotesque traditions in European arts and letters. These films were more than simply received-they were also, to use playwright Bertolt Brecht's term, re-functioned, transformed by context and appropriation. Brecht himself adapted the lumpenproletarian gestures of Charlie Chaplin for developing his epic theater. Aside from this meeting of Tramp and Marxist dramaturge, I analyze a series of American-German constellations: Buster Keaton's androgynous deadpan through Dadaist Raoul Hausmann, white-collar employee Harold Lloyd   iii   through comic schlemihl Curt Bois and uncanny cartoon Felix the Cat through the animated, feline guide of Paul Leni and Guido Seeber's interactive crossword films. I situate these meetings within a broader historical circuit, with exiles from Hitler's Third Reich returning slapstick's favor by transforming American culture, even influencing heroes like Chaplin. Given the continued interest in the thought and culture of the Weimar era, I offer a case study for reevaluating its legacy vis-à-vis transnational cinemas, the relationship between avant-garde and mass media and modern theories of humor.   iv