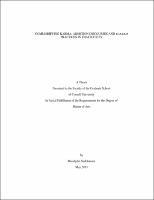 In Thailand, abortion received little attention until the 1980s, when some social activists introduced legal reforms that would have legalized the practice, but they failed to achieve their goals. From the 1990s to the present, abortion became a topic of popular discourses as Buddhism became increasingly commodified. Entrepreneurs introduced ways for women who have had abortions to pay for services that would ameliorate their bad karma; this is known as the trend of kaekam. While the dominant discourse has long depicted abortion as a life-destroying act from a Buddhist perspective, the emphasis on embodied karma in the form of vengeful child ghosts, the ability to change one's karma through certain rituals, and confessions by those involved in abortions is all recent. I argue that these phenomena not only dominate public discussions and perpetuate abortion stigma, but also allow some groups to gain economic benefit from the fear of the negative effects of the karma incurred through various forms of the karma business.