It'S The Prosocial Thought That Counts: Authenticity, Sincerity, And Perceived Motives In Dyadic Exchange 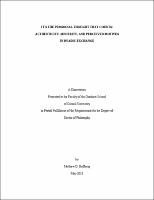 Despite the importance of authenticity and sincerity in the public imagination, sociological investigation has been stymied by the murkiness of these concepts. In this dissertation, I clarify these concepts and situate them in a broader empirical literature. I then narrow my focus to investigate three questions related to the causes, consequences, and mediating role of perceived sincerity: What is the impact of perceived sincerity in exchange relationships? What informs these perceptions? And how does the study of perceived sincerity advance existing theoretical work in social exchange? I argue that prior explanations of reciprocity that refer to the norm of reciprocity fail to address the peculiarly human ability to perceive sincerity-i.e. to distinguish between others' behavior and the ostensible motives that underlie others' behavior. To address this shortcoming, I develop and test a theory predicting that perceptions of sincerity or the lack thereof have lasting consequences for the cohesion of emerging relationships. I also predict that recipients' own dispositions, as well as the prevailing organizational culture, are critical determinants of perceived sincerity, informing the intentions that recipients ascribe to favor givers. Using a combination of experimental, interview, and survey data collected in the United States, India, and China, I find that 1) cohesion between exchange partners is far more contingent on perceived intentions than the observable "mechanics" of exchange emphasized in traditional explanations of reciprocity, and 2) those holding prosocial values reciprocate more than those adhering to proself values, yet not because prosocial values suggest a general selflessness, but because they are associated with a greater tendency for perceiving others as sincere. Taken together, these findings constitute a social cognitive perspective of reciprocity that helps explain the development of long term solidarity in dyadic relationships, with implications for the study of teamwork and organizational behavior, institutions, and social networks more broadly.