Investigating The Connections Between Pre-Mrna Splicing, Chromatin Remodeling And Transcription, And 3'End Processing 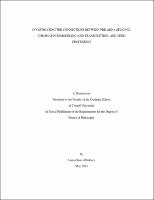 Pre-mRNA splicing is an essential eukaryotic pathway which controls gene expression. Increasing lines of evidence indicate links between splicing and other RNA processing pathways such as chromatin remodeling, transcription and 3'end processing, yet in many cases the specific proteins responsible for functionally connecting these pathways remain unclear. To determine the full complement of factors which impact pre-mRNA splicing, I developed a genome-wide screen in Saccharomyces cerevisiae which allowed me to evaluate differences in splicing efficiency in the background of ~5500 unique gene mutations. By measuring expression changes in precursor levels by high-throughput quantitative PCR, I detected enrichment in several classes of genes, with very strong candidates mapping to the chromatin remodeling, transcription and 3'end processing classes. One of these candidates is the bromodomain protein Bdf1, a component of the transcription factor TFIID and also a member of the SWR-C chromatin remodeling complex. Splicing sensitive microarrays confirm that deletion of Bdf1 leads to a global splicing defect, while ChIP-qPCR data reveal a decrease in U1 snRNP recruitment at intron containing genes, suggesting an inhibitory effect on spliceosome assembly. Conversely, Bdf1's homologue Bdf2 with which it is 46% identical, does not impact pre-mRNA splicing or spliceosome recruitment, consistent with my hypothesis that Bdf2 functions mainly in transcription. To further characterize Bdf1 function, I modified the high-throughput screening approach described above and employed it in a forward genetic manner to enable a mutagenic analysis of the Bdf1 protein. This analysis revealed that the C-terminal tail which overlaps with the Taf7 interaction domain, and contains a conserved SEED region and one of the known phosphorylation sites in Bdf1, may be responsible for the splicing defect. In opposition to the global splicing defect exhibited by Bdf1, mutations in 3'end processing factors such as Cft2 and Yth1 result in transcript-specific defects. My results highlight the cross-talk between 5' and 3'end processing factors and the spliceosome, and support a model in which the definition of terminal exons in the budding yeast is identical with the mechanism described in higher systems. Furthermore, the novel role of Bdf1 at the interface of transcription and pre-mRNA splicing suggests a new mechanism that underlies the coupling between these two RNA pathways.