Essays In Time Series Analysis In The Frequency Domain 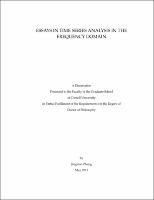 In financial markets, economic relations can change abruptly as the result of rapid market reactions to exogenous shocks, or, alternatively, change gradually over a long time span incorporating various activities and responses from multiple market participants at different points in time. Studies on financial contagion concentrate on such changes in interdependence relations among economies, industries, or institutions. These changes in interdependence can be measured by the instabilities in the covariance structure of two asset returns, which consists of the contemporary covariance and all lag orders of the crossautocovariances. By Fourier Transform, a spectral density function contains equivalent information as covariance function. Therefore, any changes in the covariance structure can be capture by changes in the spectral density function. In the first chapter, Detection of Abrupt Structural Changes: A Spectral Approach, I propose a spectrum-based estimator to detect abrupt changes in the covariance structures. In this approach, detecting these abrupt changes is equivalent to locating the step discontinuities in the time-varying spectral densities and cross-spectral density. The estimator can then be implemented based on a comparison of the left and right limit spectra of the potential time spot. This method brings together and improves upon two strands of the literature on structural changes. Compared to the existing estimators in the structural break literature which mainly consider structural changes as discrete level shifts in an observation period, my method is more general in allowing occasional breaks to occur in a smooth change circumstance approximated by locally stationary processes, thus subsuming level shifts as a special case. My method also extends the literature that focuses on smooth changes approximated by local stationarity by relaxing the assumption of continuity and by introducing abrupt changes. I empirically apply the estimator to pairs of index returns in the subprime mortgage, stock, and bond markets during the 2007 subprime crisis and the 2008 global financial crisis. The empirical results show that during the crises, abrupt changes are apt to be but not necessarily triggered by specific shocking events. Moreover, most of the changes in the dependence structures of index returns are closely related to the changes in the marginal covariance structures of the returns. However, not all of the changes in marginal covariance structures lead to changes in the cross-covariance structures. The detection method is adopted in the second chapter, Post-Crisis Global Liquidity and Financial Spillover: From U.S. to Emerging Markets. This paper empirically investigates the linkages between U.S. markets and emerging markets to identify the global liquidity and financial spillover after the 2008 global financial crisis. A two-step method is adopted to capture dynamic patterns and structural changes in the linkages between the bond and stock markets in U.S. and BRICS. The results show that most abrupt changes in the U.S. and BRICS markets were due to specific shocking events in the U.S. markets and the abrupt changes were globally synchronous after the global financial crisis. Furthermore, there was a temporary liquidity spillover from U.S. to some of the emerging markets, as the U.S. Federal Reserve implemented the second round of quantitative easing. Overall, the lead effects of the U.S. bond and equity markets were much more significant than the spillover effect of the U.S. liquidity. Thus the financial spillover was more likely through the correlated-information channel than the liquidity channel. The third chapter, Generalized Spectral Estimation of Time Series Conditional Moment Restriction Models with Infinite Dimensional Conditioning Set, is coauthored with Zhaogang Song. We propose a generalized spectral estimator via frequency domain methods for a class of time series models. This class of time series models is defined by conditional moment restrictions with infinite dimensional conditioning set. The framework is general enough to cover most models which can be represented by conditional moment restrictions as special cases, including IV, nonlinear dynamic regression models, and rational expectations models such as consumption based asset pricing models(CCAPM). The estimator is obtained by minimizing the Cramr-Von Mises distance between the unrestricted generalized spectral distribution function and the model-implied correspondent, which is equivalent to setting a pairwise nonlinear dependence measure as close as possible to zero for each time lag order. It can be understood as a GMM estimator based on a set of moment conditions which grow with sample size. Not only is the infinite dimensional conditioning information is embedded in this estimator, but also the nonlinear dependence is captured. Another feature is the simplicity since its implementation does not require selecting any user-chosen number. Simulation studies show that unlike existing estimators which can only deal with either linear dependence or a fixed finite number of conditioning variables separately instead of simultaneously, our proposed estimator are free of any identification problem as expected by incorporating both nonlinear dependence and infinite dimensional conditioning information. An empirical application for estimating CCAPM is conducted and we find that economic agents are much more risk-averse according to our estimator than what Hansen and Singleton's(1982) GMM estimation results imply.