On The Principles Of Nature: An Interpretation Of Aristotle'S 'Physics' I.5-8 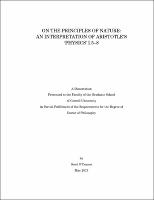 I argue that Aristotle in Phys. I believes that the pre-existing matter a natural being is made from persists through this making. Some have denied this claim. They have argued that Aristotle there claims that (i) each persisting subject has a diachronic criterion of identity, and, so, (ii) the matter a natural being is produced from persists only if there is a diachronic criterion of identity for it, but (iii) there cannot be such a criterion of identity for matter given how Aristotle construes it. I argue, in contrast, that Aristotle is neutral with respect to (i), and so focus on whether matter, as he construes it, could have a diachronic criterion of identity offers no means of deciding whether he is committed to its persistence in Phys. I. If I am right, Aristotle's views of persistence in Phys. I have been misunderstood. He remains neutral there about the metaphysics of persistence. Nevertheless, he does claim that each subject persists through that change it is subject for, and so does believe that the pre-existing matter that a natural being is produced from persists through this making. While Aristotle does not focus on the metaphysics of persistence, I argue that he does focus on the scientific question of how things persist as they are being acted upon and changed-which is a different question, I argue, from the question of what the identity through time of any being consists in.